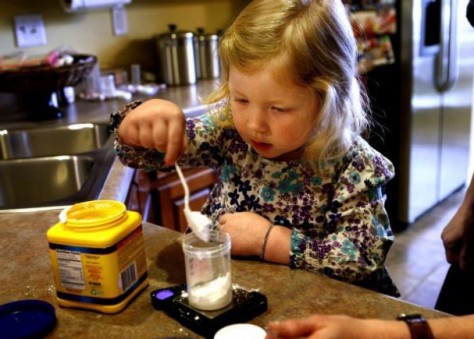 At 9 months old, Avery Robinson got a diagnosis that just three decades ago would have been a death sentence.

Avery has glycogen storage disease, a disease so rare that only one other child in the state of Mississippi is thought to have it, according to Avery’s doctors and parents.

The rare genetic disorder is marked by her body’s inability to produce an enzyme that allows her to maintain blood sugar levels. As a result, Avery has to eat or be fed every two waking hours or every four hours when asleep. She risks dangerous build-ups of lactate, uric acid and triglycerides leading to impaired breathing, seizures and coma if her strict regimen is disturbed in any way.

She has never eaten fruit, simple sugars or dairy. And at age 4, Avery, who lives in Hernando, knows more about GSD than even some of the local medical community.

“I have to wait now because in a minute I have to have my cornstarch,” she said before heading off to gymnastics.

Cornstarch, which is slowly digested, is a major staple in Avery’s life. She eats it to maintain her blood sugar between her carefully planned meals. When she is going to be active, she eats a little more than usual.

Just looking at her, it’s hard to tell she is sick. Credit for that goes to her parents, Adam and Nikki Robinson, and Dr. David Weinstein at the University of Florida, the leading authority on the disease.

With about 400 patients, Weinstein said he treats about 90 percent of the cases diagnosed in the U.S. as well as treating patients from 28 other countries.

“Prior to 1971, it was fatal and even as late as 10 years ago, many children weren’t surviving. That’s why I have made this my life’s work,” he said.

Weinstein has run the GSD research program at the University of Florida for the past seven years. His research has been focused on finding a treatment that minimizes the disease in his patients’ lives. He has already accomplished this in the lab.

“There is a breed of dog in which this condition is naturally occurring, and we have successfully treated them and they are now living very normal lives,” he said.

“Avery is thriving because of Dr. Weinstein’s work on GSD,” Adam said. “And the thing is, he is close to a treatment.”

The rarity of the disease is what led the Robinsons to start Avery’s Hope Fund. It’s designed to raise public awareness so they will help fund Weinstein’s research.

Now, there is not an aspect of the disease the Robinsons are not familiar with, out of necessity. Any sign of something like a stomach flu in Avery’s case is life-threatening. If she vomits, her parents have less than two hours to hook up a pump directly to a port in her stomach to maintain her blood sugar. If they are unable to for any reason, the next step is hospitalization.

“We have had to call paramedics and they always first think to give Avery glucagon like they would low blood sugar in a diabetic, but Avery’s body can’t take that. In fact, it could raise her lactate levels so high it could kill her,” Nikki said.

But the Robinsons are quick to point out that none of the money donated to Avery’s Fund is for Avery’s care; they have that well in hand. The fund’s goal is to make Weinstein’s research and the gene therapy treatment a reality for everyone with GSD.

Since the Robinsons began the fund last summer, they have raised $15,000. Adam estimates it will cost about $3 million raised by funds like Avery’s before the human trials can begin.

For more information on GSD or donate to Avery’s Hope Fund, visit averyshope.org.

Avery's Hope Fund was established to raise public awareness about Glycogen Storage Disease and to support fundraising efforts to find a cure for this disease.